There are health risks that Regular Blood Test could not detect!

No Sign of Improvement from the supplements even after eating them some period of time?

Learn More why do you need this ONCE-ONLY-LIFE-CHANGING TEST ! 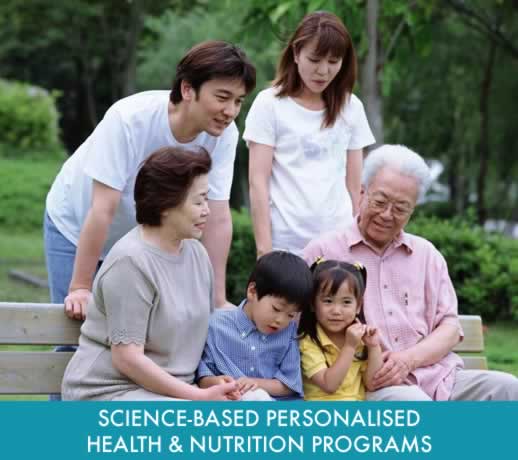 Welcome to this Fast Track Health Program that is going to assist you in Maximising Your Health Potential.

Our certified practitioner will review your Personal Genetic Profile report and any variations you may have in your genes which in turn, can influence your fitness, health and nutrition. This information, combined with various health and lifestyle assessments is used by your Certified Practitioner to design more personalised and targeted nutrition, exercise and lifestyle interventions. Your Personal Genetic Profile is an important 'piece in the puzzle' helping you maximise your potential for 'Healthy Living : Healthy Ageing'.

Nutrigenomics is a new scientific discipline which studies the interaction between our genes, diet and lifestyle choices and how these can influence our health and wellbeing. It's true, we can't change our inherited genes, however we can compensate for their influence by choosing better nutritional matches for our genes. In short, we can repair DNA damage and improve the functioning of our genes by making the right nutrition, exercise and lifestyle choices. 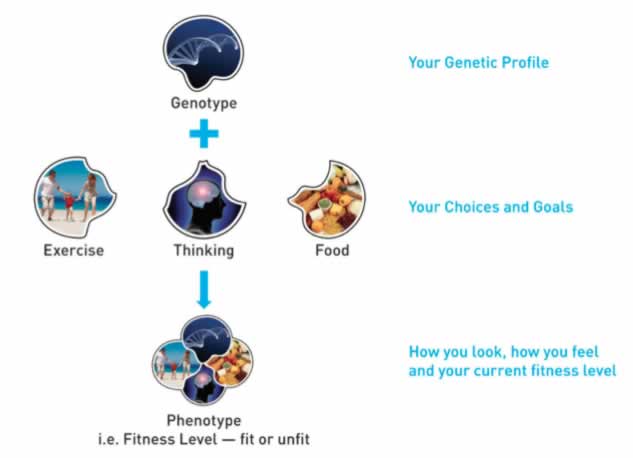 Your Genetic Profile Report has been designed to identify any 'potential' genetic variations that may influence the way your body functions and how it responds to what you eat, how you exercise and how you live your life.

To make it easier for you to understand, we have classified the results of the genetic diagnosis as follows: The variant can be either the normal (reference) or a variation.

The normal (reference) variant is carried by the majority of the population or to put it in another way, that variant is the one that is typical or standard.

As genes in a normal human being exist as a pair, we can have a situation in which one or both of the genes may vary from the normal one. This variation may result in three possible outcomes as listed in the following table.

Note: In some rare instances the Normal (reference) gene may be less beneficial, i.e. the variant may be advantageous.

The genetic variants tested as part of your profile have been grouped according to the primary physiological effect they have on your body. These groups are;

The major purpose of these groups is to help identify the focus area(s) for your nutritional, health and lifestyle interventions. A high number of 'less' beneficial or 'least' beneficial variants in a group is a 'Call to Action'.

Once you have identified your primary focus group and completed any health and lifestyle surveys to identify your Phenotype (your current health status), your Certified Practitioner will recommend the appropriate interventions to help reach your health goals.

Targeted Interventions Tailored to Your Needs

Please note, the information regarding your genotype is to be used in conjunction with the health and lifestyle assessments as provided by your Certified Practitioner, we can help to assess your current phenotype and give you the correct advice.

Irrespective of your genetic predisposition after the testing, it is recommended that you follow the treatment plan provided for you by your Certified Practitioner in order to achieve the best results you can.

To use the analogy of a football playing field, some people have a larger 'genetic' playing field than others; to cross the boundaries would be unwise. Understanding there is ample room to move within your own field, and therefore know your boundaries means you can work within your genetic means. The are no limitations as such, just boundaries to work within.

Remember: Your genes are the same throughout your life, so whether you are 23, 43 or 63 years of age each different life stage may elicit different personal goals such as: stress reduction, hormonal balancing or weight loss and therefore, may require more targeted interventions specific to your own goals, current health and lifestyle.

Additional Benefits That You Will Receive are: 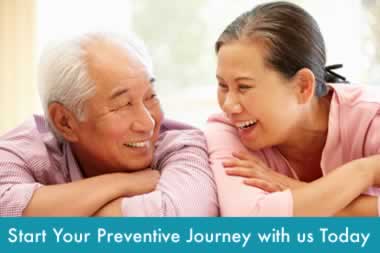 Number of Test: 54 potent Genes which focus on

1) You will start with a simple Buccal Swab Sample Collection.

2) Then Sample Analysis will be done in the lab.

3) When the result is ready, Practitioner will interpret your DNA Profile.

4) Practitioner's Consultation will be included.

5) A Personalised Wellness Plan is included to kick-start your healthy lifestyle.

Get involved with our healthcare programs. Fill up the form below to find out more!

What is the scientific basis of DNA Profiling?
Whoever you are, all essentially related to your genes is what you inherit from your parents and they are being passed on to your children. It is this information encoded in the form of genes that decide your skin color, hair and eye color, texture, almost everything that makes you unique can be ascribed to the genes that you carry.

In order to create a personal DNA profile, geneticists look at the particular areas on the chromosomes that have some significant characteristics. Those regions are called microsatellite DNA. They do not encode any proteins and consist of repeated nucleotide sequences (tandems). Scientists argue that they serve as landing marks for enzymes that are involved in DNA functioning, similar to the marks that airports use for the landing aircrafts.

Microsatellite DNA contains certain tandems, which significantly differ from individual to individual. However, are likely to be similar in close relatives. That quality is used for parental identification.

What methods are used for DNA Profiling Test?
There are four different methods used for DNA profiling. For all of them, a sample of human tissue is needed. It can be a buccal swab or a sample of tissue including blood, semen, hair, teeth and saliva.

The oldest method is RFLP analysis. It is based on segregation of microsatellite DNA sequences in the gel using electrophoresis and further extraction and creation of X-ray images to identify them. This method is precise but has its limitations and not used for parentage identification.

In modern practice, PCR test is widely used due to its speed and the ability to analyse the tiniest s amount of sample available. This method though can't be used if there is a possibility of sample contamination (for example, in case of sexual assault evidence, where biological material can belong to more than one person).STR analysis and AmpFLP both uses PCR test technique coupled with electrophoresis and enforced by statistical analysis of the received data, but they look for different tandems found in DNA. They are the most commonly used methods. Mitochondrial DNA analysis is used when biological sample is highly degraded. It is useful for anthropological research and criminal investigations.

In short it would not be wrong to say that DNA profiling gives you a conclusive and firm control over your current and future health and also arrest the risk of any possibly genetically transferred health issues for your children. However, interpretation of your DNA profile is crucial in order to live longer healthily. This DNA Profiling services have now arrived in Malaysia. People from Penang, Johor, Sabah & Sarawak even Indonesia and China can now visit Klang Valley to take their dna profiling test without having to pay hefty bill for their health.