DNA is an abbreviation for DeoxyriboNucleic Acid.  DNA encodes genetic information necessary for functioning and development of the organisms. In eukaryotes (humans, animals and plants) DNA stored in the nucleus as well as in some organelles (mitochondria or chloroplasts), in contrast prokaryotes (bacteria) store it in their cytoplasm.

DNA is a very long polymer molecule that is made of nucleotides, attached to each other. There are millions of nucleotides in a DNA molecule. Each nucleotide consists of monosaccharide and phosphate group forming a sugar-phosphate backbone. It also has one of the nitrogen-containing nucleobases.  There are four nucleobases: Guanine (G), Adenine (A), Thymine (T), and Cytosine(C). Most living organisms have two molecules of DNA connected together by hydrogen bonds between pairs of nucleobases.  Adenine only bonds with Thymine and Guanine bonds only with Cytosine. 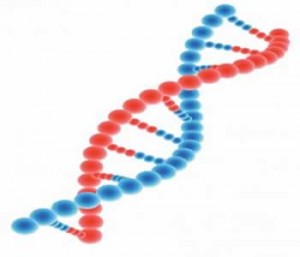 The four nucleobases form a unique code that organisms need for their development and functioning. Variation of combinations between nucleobases sequences is indefinite. When one or several nucleotides get changed or removed, the genetical code may change. That may result in loss or change of a particular trait or group of traits that organism exhibit. That change is called mutation.

Two molecules of DNA connected with each other form a double helix. With the help of specialized proteins DNA folded in the unique shape. That protects molecules from breakage and assist in its functioning. Folded DNA molecules have recognisable shapes under the microscope. They are called chromosomes. There is a certain number of chromosomes for each living thing. Some bacteria have just one chromosome while some crustaceans have hundreds of them. Part of the chromosome that encodes one polypeptide or RNA is called a gene.

How genetical code translates into proteins and signals?

It is a complex process with two major steps involved.

First step is a building of RNA (RiboNucleic Acid) using the DNA as a matrix. This process is called transcription. RNA contains the same nucleobases that DNA from which it was copied. The sequence of each three nucleotides forms a codon. It is similar to letters that form a word. The "language" of DNA consists of three letter "words" or codons. They referred to as a genetical code. Each codon encodes information about one of twenty amino acids, which are building blocks for proteins. Some codons serve as a regulation signals and do not encode amino acids.