Staying young longer is a dream shared by many generations. Nowadays we are coming closer to understanding factors that affect aging. Particularly, a lot of research has been done on the contribution of the genetical makeup in the aging process. Scientists discovered multiple genes that affect aging. Some of them contribute to the cellular repair system, some to the DNA repair, and others take part in the oxidative stress control.

For example, a recent discovery of the gene kl-vs shows that it prolongs a life and enhances the cognitive abilities of those who were lucky to carry it. Another example is an rDNA gene, which often mutated during the lifetime of a person. People with the most stable rDNA genes have longer life expectancy than others. 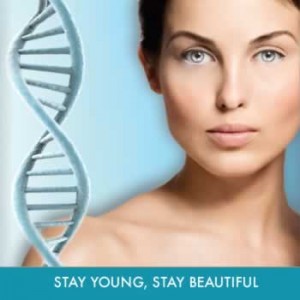 A new study published in 2012 by Spanish researchers shows the effectiveness of gene therapy in prolonging the life in mice on 15-40%. Even though the approach is not yet applicable to humans, it indicates that the procedure is safe and efficient. The essence of gene therapy method used by the researchers is simple. DNA of a non-pathogenic virus used as a carrier for several genes, including telomerase gene and several genes of cancer resistance. Further, this viral DNA allowed entering the mice cells and genes start to "work” and produce telomerase. Telomerase is a unique enzyme that "rejuvenates" our DNA (particularly the vulnerable " ends" of DNA molecules, called telomeres) and prevents aging.  Usually, telomerase found in stem cells and cancer cells and makes them immortal. Research results make as hopeful that with the advancement in biotechnology, gene therapy may become an anti-aging treatment in the near future.

For now, geneticists use accumulated knowledge about telomeres to estimate the biological age of our body. It can differ significantly from the chronological age and reflect the level of oxidative stress and presence of diseases. Telomere Test is an affordable screening that can give you information about your general health status and suggest the risk of developing the metabolic and other systemic illnesses.

Presently, the most efficient way to slow down the aging is a calorie restriction, accompanied by a normal intake of vitamins and minerals. It proved to be postponing the aging rate and minimize the signs of aging. Drugs that imitate the calorie restriction effect on the body are now under development. Anti-aging Research shows, the way we eat affects not only our health, but also the life expectancy itself.